The Sight of Sound: Traditional music in Irish Art 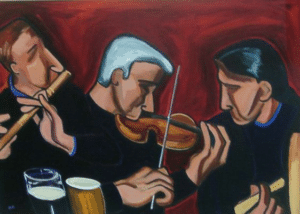 As one of the presentations in Fleadh Cheoil na hÉireann, 2019, on Sunday, August 18th at 3pm, at the Fairlanes Gallery, Lawrence Street, Drogheda Fintan Vallely gave a talk on the images of Traditional music in Irish art from the eighteenth century through to the present day.

A century and a half ago, the Young Irelander Thomas Davis urged that the plain people of Ireland and their cultural practices deserved to be represented in painting and sculpture; he regarded Art as: “biography, history and topography taught through the eye”.

Fintan Vallely assessed this aspiration by examining more than five hundred artworks that are the visual record of Traditional music over two centuries of painting and drawing. Much of the work was done by artists from outside Ireland, but despite that he finds that it is a detailed and valuable resource. Dancing is the main feature; bellows-blown pipes are the popular instrument, and there is evidence of teaching and learning. But a change is seen as we approach modern time, with the painter’s eye following the trend for music and dance to shift from being part of community activity, to being more about the individual performers. Dance style can be seen to have changed too, as has the gender balance of musicians. These findings, and others, are presented in a lecture supported by images of wonderful oils, watercolours and engravings which are not normally seen together or on such a scale.