Back to the Starry Lane · Fintan Vallely and Mark Simos

Very old and very new selections of music from, and in, the Irish and Scottish traditions, promenaded in vibrant, eclectic humour on flute and guitar. New remastered edition. 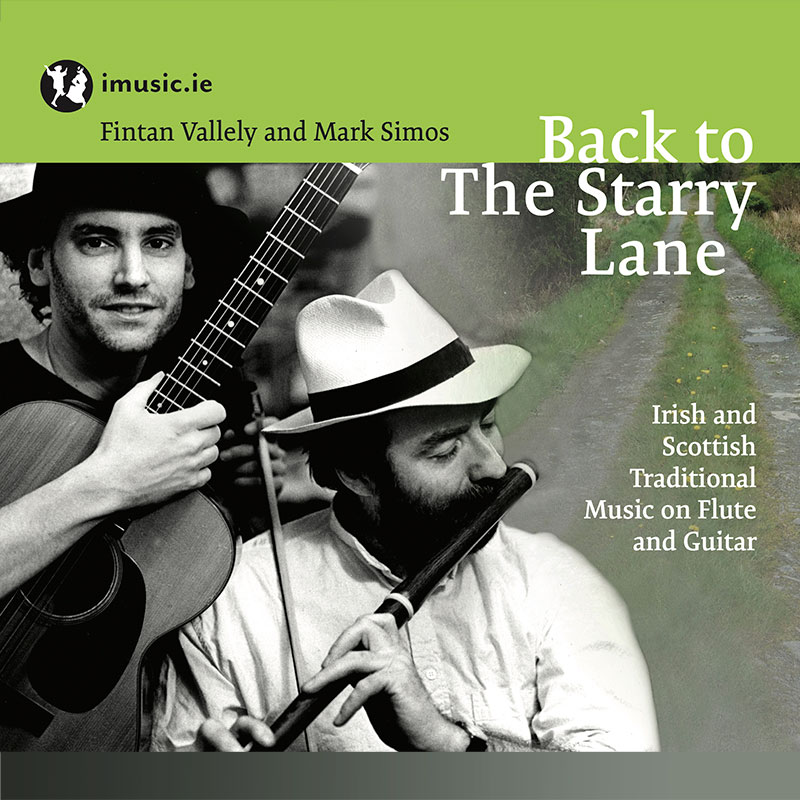 This is a collection of very old and quite new, Irish and Scottish Traditional music, a personal selection of Fintan's which arose out of his playing in Scotland with singer Tim Lyons in the 1980s. The music looks both backwards and forwards - beginning in the 18th century Scottish composition period which had tunes that we still play as Traditional music today. Included too are items of the more standard twentieth century Irish piping repertoire, some from Co. Clare, branching into 1950s-onward new composition. The old Scottish material comes from the 1765 Neil Stewart Collection of Scottish Music. Fintan had a privileged glimpse of Sutherland fiddler Charlie Menzies’ copy of the manuscript - the only one in existence outside of the George V Library in Edinburgh - while on tour with Daithí Sproule in 1989. These tunes were chosen for their similarity in style and 'feel' to Irish music, something which suggests that older Irish and Scottish music were once stylistically closer than they are today.

Fintan Vallely is from Co. Armagh, in Ulster. He brought out the first ever Irish flute tutor in 1986 (new edition 2011), was The Irish Times and Sunday Tribune critic for Irish music in the 1990s, and compiled the A-Z Companion to Irish Traditional Music (1999, 2011, 2021). Other writings are Sing Up! - Irish Comic Songs and Satires, and Tuned Out - Traditional Music and identity in Northern Ireland. His debut LP album Irish Traditional Music was by Shanachie, New Jersey, in 1979 (CD in 2008), and has a CD of satirical song with Tim Lyons - Big Guns & Hairy Drums (2000) [imusic.ie].

Mark Simos began playing rock music in Los Angeles, evolving into Irish Traditional with Knock na Shee, then as a fiddler songwriter and tunesmith played Old-time, New England, Quebecois, Bluegrass and Klezmer. An accompanist on many albums, his four solo CDs feature original song and old-time-style fiddle tunes. Alison Krauss and Union Station, the Del McCoury Band, Kate Brislin and Jody Stecher have recorded his work. He played on Fintan's 1979 album, but this one arises from a chance encounter in Valpolicella, Italy in 1990 [devachan.com].

Available as CD or by download code online from www.whinstone.net