This is Fintan Vallely’s first album, recorded while in America in the early autumn of 1979, and released as LP and cassette in 1984. In it his style is raw and fresh, yet rounded and solid. He plays here with Mark Simos (guitar, who played on his second album also, The Starry Lane to Monaghan), CB Heinemann (bouzouki) and Lori Cole (piano and English concertina).

Fintan Vallely was born in apple country in north county Armagh. He was brought up in the townland of Drumsill just off a mile-and-a-half long stretch of narrow road known as ‘The Dark Loanen’, so called because its high thorn hedges used practically meet at the top.

Several of the local townlands had given birth to some of the better known céilí bands of the nineteen forties and fifties – The McCusker Brothers, Johnny Pickering and Malachy Sweeney bands – and in his father’s time the McCuskers often played for barn dances in the upstairs hayshed beside the family home each spring and early summer.

By the time Fintan became interested in music, this céilí tradition was more one crack and telling yarns rather than of sessions and dances, and fiddles and accordions, pianos and drums prevailed rather than flutes or pipes. His maternal grand father however, Frank Kelly of Co. Derry, a fiddler himself and descendant of Derry harpmaker Cormac Ó Ceallaigh, had led one such band, centred on the Banba hall at Straw, Draperstown, a genetic strand which may have led Fintan to take up whistle, flute and uilleann pipes in the nineteen sixties. 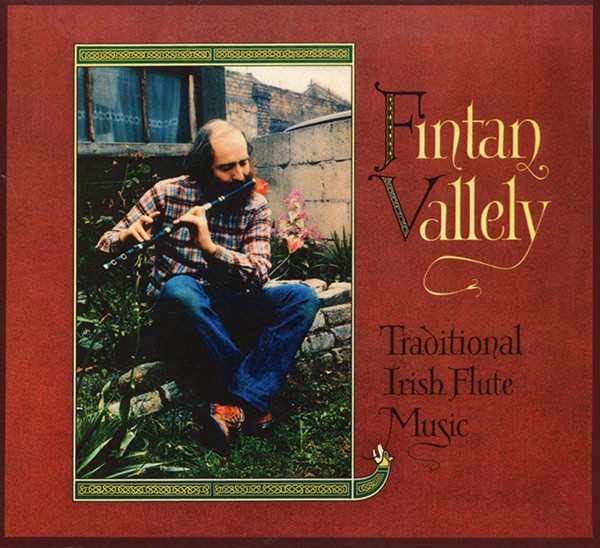 Fintan's music-making began on a whistle he bought in céilí-bandsman Hughier Traynor's shop at Christmas 1963; fingering learnt from the Generation tutor-sheet that came with the instrument. His first tunes music was airs of songs learnt at home, in Liam O'Connor's Cushendall Irish college, the Teelin Gaeltacht, and then from what he picked up from the wireless (radio), at local Folk Club sessions, a borrowed copy of the scarce O'Neill collection, and the odd 78rpm record found in Pat Allen's antique shop. Overlapping with this, in collusion with his cousins Brian and Dara, who were – independently – also beginning to play whistle, flute and uilleann pipes, a routine of playing in local sessions and travelling to fleadh cheoils developed. The Armagh Pipers’ Club was formed out of this, an initiative by Brian, and developed with his wife Eithne, a fiddle-player from Donegal; it now teaches a large number of learners of all ages and has made a huge contribution to the music life of the region.

"Fintan began playing flute on a nineteenth century ‘Blackman’ flute bought for him by Brian in an Edinburgh junk shop. Keyless by the time of the recording, and often held together in lean times with hose clips on the head joint, it is the flute used on this recording, with a strident and beautiful tone. The keyless state of the instrument, it might be mentioned, is responsible for Fintan’s distinctive ‘bent’ C, achieved by half-holing instead of cross-fingering or using the C-natural key. Along with his cousins, Fintan spent a lot of time travelling about to sessions in Co. Armagh and Co. Tyrone. Brian had found out about numerous musicians from the areas, among them John, James and Malachy Comac from Donaghmore, John Hayden from The Rock, the McIlvennas from Coalisland way, Tommy John Quinn from the shore of Lough Neagh and John McCann from Dungannon. They in turn were close to the great Sligo musicians Fred Finn and Peter Horan and there was frequent travel back and forth between the two groups. Fintan’s technique is quite complex and among flute players he is known for his powerful and expressive playing. His style differs from that of most other flute players in his approach to breathing, which he developed more or less instinctively. Using his wind to punch out the rhythm of the tune he ‘pants’ as it were, on every other beat in reel and on every beat in a jig. In conjunction with his breath attack, he articulates notes with a tongued ‘K’ sound at the back of the throat. His fingering enhances the highly rhythmic breathing, incorporating techniques from the uilleann pipe playing he did from about 1968 until 1972. Overall, his playing is akin to close or ‘tight’ piping and to Leitrim style fluting. On the personal side Fintan is a deeply thoughtful and humorous person, articulate and sharp; these qualities are reflected in his music
- Jane Kelton

Thanks to Jane Kelton, and to Dan Collins of Shanachie, for support, direction and inspiration, setting up the original recording. Thanks to Dan, and to Richard Nevins for making the original tapes available for this album. Thanks to Nicholas Carolan and Danny Diamond at the Irish Traditional Music Archive in Dublin for digitisation, and to George Brennan for mastering the first CD version. Particular thanks to Nick Lethert in Minneapolis for the exceptional attention in producing the liner notes and album design.

Notes on the tunes

'Down The Broom' – from the early Tyrone sessions; a great favourite of the Comacs and John Loughran. 'The Gweebarra Reel' [a.k.a. 'Gweebarra Bridge' & 'The Killarney boys of Pleasure'] was learnt later from Eithne [Ní Chiardha] Vallely.

'The Mug of Brown Ale' - learned from Jane Kelton in New York; 'An Port Ard' is a composition of Junior Crehan of Co. Clare, learnt from Séamus MacMathúna's and  Breathnach's Tacar Port music sheets.

'The Repeal of The Union' / 'The Boy in the Gap' – from Breandán Breathnach’s transcriptions in CRÉ1.

'The Stone in The Field' (CRÉ 1) / 'The Knotted Cord' (from sessions in Dublin) / 'The Green Fields of Glentown' (by Tommy Peoples, from Eithne Vallely)/ 'Return to Camden Town' (from Máirtín Byrne’s playing).

'Christmas Eve' [a.k.a. 'Tommy Coen’s'] learnt from  a transcription by Paddy Rafferty in Newry / 'The Reel of Rio' [composed by Sean Ryan] – learned at Tyrone sessions.

'The Maid in the Cherry Tree' / 'Castle Kelly' – Learned from Jock Burns of Dublin who makes a terrific job of them on the concertina.

'The Battering Ram' /'The Munster Buttermilk' – from John and Malachy Comac, one of the popular session sets in the nineteen sixties in Tyrone and Armagh. The version of the first tune is a little different to the one usually heard around.

'The Bunch of Keys' [a.k.a. 'Paddy on the Turnpike'] – originally picked up as a two part skeleton from a céilí band ’78, later added to with some notes from ‘The Flowers of Limerick’ in O’Neill’s 1000 Gems book, and the third part added after hearing it played by musicians in Dublin. O’Neill’s version does not have the F natural favoured fiddle, box and concertina players / 'The Humours of Ballyconnell' / 'Mary McMahon' are session tunes (the former is Scottish, originally called 'The Duke of Atholl’s Rant'); 'Maudabawn Chapel' [pronounced Mwidge-a-bawn] is a composition of Ed Reavy, born in Cavan who lived in Philadelphia and kept his home connections alive through his tune names.

'Colonel McRory' was leant originally from CRÉ 1, but played widely in Tyrone and Sligo, where it is matched with 'McKenna’s No. 2', a set played and known as ‘McKenna’s’, by the iconic Leitrim flute player John McKenna on his 78' recordings; 'Over the Moor to Maggie' is from Sean Casey and Daithí Sproule who in The Four Seasons sessions in Dublin would tack this one on at the end – a good way to de-escalate after the feverishness of the preceding two tunes.

'Fred Finn’s Polka' – The polka is by no means restricted to Kerry and Cork: my remarked c. 1979 that a lot of tunes she heard played then by Johnny Leary, Denis Doody or Jackie Daly on records (heard on radio) were common at the dances she went to in the 1930s in Co. Derry and at The Gap, a well-known dance hall near Sixmilecross in North Tyrone. Sligo is no exception either, and this polka I learnt from a tape of Packie Daignean which was given to me by Gregory Daly. Peter Horan says it was learnt from Fred’s father who brought it over from America.

'The Beauty Spot' - learned from Eithne; 'Paddy Taylor’s' / 'The Humours of Loughrea' – from the playing of Paddy O’Brien, the accordion player from Co. Offaly.

LISTEN TO TRACK SAMPLES, OR DOWNLOAD ALBUM OR TRACKS HERE