SAMPLE TRACKS CAN BE HEARD HERE

With the international fashion of Folk musics the bodhrán has multiplied in geometric progression as a symbol of instant access to music-making. It has reached nonsense proportions in the Irish Fleadh Cheoil and English Folk Festival scene where a melody instrument may well start off the music, but the percussion swells in and eventually becomes an end in itself. Ever aware of this scenario all round him the whole summer long, Tim tells the original yarn about the bodhrán in song in which he vilifies the 'typical' tourist as German (it used be American) but lets the goat get away. Sensibly enough he robbed The Cuckoo's Nest to lay his tonic eggs in - to eliminate the possibility of any German ever learning the song.

Martin O'Malley from Miltown Malbay in West Glare is an outstanding patron and enjoyer of traditional music and Song. A farmer. the only thing which interferes with his hay making is the cursed Willy Clancy Summer school in the first week of July. On the one sunny day of 1985 while at the hay he set his teeth on the wall for a rest after dinner, and a jackdaw robbed them. Two years later a neighbour (called Crowe) found them, So Martin coined the immortal words: "Robbed by a jackdaw, brought back by a Crow", and the song gushed forth. 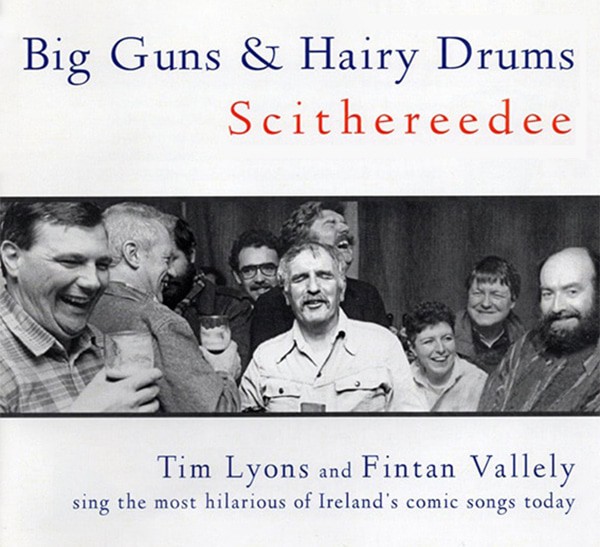 To a traditional air, this is about the Fast Food industry which is fattening the Western Hemisphere and will eventually kill it off, a result of Tim being half poisoned by a half-thawed, botulism-ridden alleged burger he foolishly once bought on the side of the street at the Willy Clancy Week one year.

4/ Dunne's Story Beats Them All.

"DUNNES' STORES BETTER VALUE BEATS THEM ALL" used be the famous slogan of Ireland's most competitive cut-price supermarket which specialises in selling the fastest-moving items at the lowest prices. Its millionaire proprietor, young Ben Dunne, while on an alleged golfing trip to Miami O.D.'d on cocaine and was arrested after going off his rocker in the company of a woman from an escort agency. Later on he appeased the Catholic hierarchy by joining in the Irish supermarket blockade against selling condoms.

The police will stoop to any level to wipe out drugs, even corrupt innocent dogs by getting them hooked so that they will do anything to get a sniff. Tim was taken by the tale of this beast, one Jake, who was once kidnapped for interrogation by the drug barons.

One morning in 1985 the yacht of Charles J. Haughey crash-landed on the Mizen Head off Co. Cork as he was rushing home to eventual accountability for his expensive lifestyle. The Mizzen's lighthouse keeper counselled the survivors by torch light, and the Party faithful flocked to Baltimore to witness their boss being winched ashore and dried out on the pier - all timed perfectly to get the Sunday one O'clock news. The 'taypot' is the one Charles gave away to Maggie Maggie Maggie (leaving a lonely gap in a set in the National Museum) and the `sickening crunch' is his own description of the docking.

Tim wrote this opus in desperation at the bad summer of 1985 which caused a National gloom both that year and the one Slier. The bad Weather must be held accountable too for Gay Byrne depressing the half of the country about the joys of working in America and Australia thereby creating an emigration crisis among people foolish enough to take him seriously The exodus makes the famine years look like a bomb- scare, and he didn't go himself in the end, now trying to convince us to become millionaires).

There is a pool of water in the North pole ice a mile across. There is a hole in the ozone layer which if it doesn't incinerate us all will drown us in melted icebergs. Steps were taken some years ago to limit the substances which were causing all this, while at the same time the price of cars has been kept down to make sure that none of it will work. The song explores the contradictions involved with those who fetishise the colour of the body.

The apostles, as everybody knows, were heavily into Irish music and they liked a couple of drinks of a weekend - especially with a Bank Holiday coming up. Christy Moore told Fintan this story in joke form one Good Friday in Maisie Friel's of Miltown Malbay as all were breaking the law for pleasure. Fintan wrote it as a commission for RTÉ's 'Sunday show' at Easter, 1990. Producer Noel CoughIan wasn't pleased, nor was presenter Andy O'Mahoney: their show was a "family" one, so it was censored out.

The 1969 EEC elections were celebrated by people all over Ireland killing each other to get to blazes out and find a good job in Brussels. Tim doesn't agree with all this rot and sets out in detail the cashed hopes. false promises. ruined economy. automated pubs and other awfulness that have been the result of Ireland's joining up in '71.

Prior to `83 contraception was illegal in Ireland. This led to unwanted pregnancies, large families, single mothers - and to abortion in England. A group of impeccably moral citizens in 1983 initiated 'The Referendum" to prevent women making such decisions, and then the law eased so one could get condoms - but only from a doctor (if you planned busy sex-life it would be cheaper to emigrate). Since the Well Woman clinic respected the woman's right to choose, and, furthermore, was liberally interpreting the law by giving out condoms free, in return for a small voluntary donation, 'The Referendum" crowd put pressure on the Gardaí to prosecute. A lad was sent to the clinic to purchase a condom which became `Exhibit A', and long after the things had been made legal the clinic was fined £50 for their dastardly crime.

A tale of hard times when the innocent lad in a strange town is beguiled by the charms of a smart woman and ends up penniless. A gem of a traditional piece to the air of the jig Tatter jack Walsh.

A song on the victory of the Miltown Malbay GAA club's victory over St. Bricín's, Lisdoonvarna, in the Clare Co. GAA football final of 1985. The training was rigorous and scientific, driven by bank worker Gerry Fitzgerald, and reputedly inspired by the visions of local seeker Liz Curtin, and at least one of the team had been pepped by a holiday in the sun. The club's colours were saffron and wine, all manner of international supporters' paraphernalia was recruited to boost the home side, but it was the Lisdoon side that appeared on the day in the most modern of sportswear. The victory pyre was lit close to the petrol pumps in the village, and celebrations went on into the night.

14/ Confessions of a Bodhrán Player

This addresses the New-agey type of player of the modern Irish skin drum who mistakenly believes that this the oldest thing around, and, conveniently, also perceives it as easy to play as stamping your foot. Neither is true, and so bodhrán players continue to take the brunt of the jokes inside Traditional music.

15/ The Grisly Murder of Joe Frawley

The grocer-cum-publican is common enough in rural anywhere. Joe Frawley had such an emporium, and was a politician too. Ever since Irish women took to the pub after the epidemic of addiction to Dallas where every sentence used a drink as punctuation, music came to be provided as entertainment, sometimes the native stuff, more likely a cocktail of Country and pop. Often, to save expense, local Trad musicians would be recruited, and called a 'session'. Substances other than alcohol would be consumed too, and Tim's parody on the classic 'murder' ballad romantically unfolds. The 'holy hour' was the now-obsolete dinner-hour during which Dublin pubs were closed to give unionised bar-staff a break.

In 1985, in twenty-six places around Ireland, previously content and immobile statues of stone, plaster and reinforced concrete began to move - wink, weep, bleed, sigh, talk and even light up. The thing caught on like good scandal and became the only growth industry of the 1980s. Nell McCafferty pondered the curious fact that the statues only moved in the 26 Counties (Fintan's theory is that the ones in the Six Cos. were afraid to move). It was all brought on by all the talk and referenda on divorce and contraception; the air is that of the 1960s Civil Rights anthem.

These songs appear in print in Sing Up!, published in July, 2008