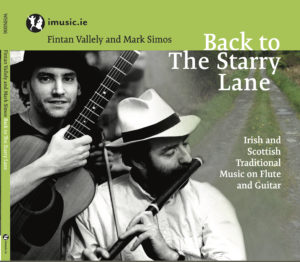 Fintan Vallely and Mark Simos – Back to The Starry Lane

Very old and very new selections of music from, and in, the Irish and Scottish traditions, promenaded in vibrant, eclectic humour on flute and guitar. New remastered edition.

The music
This is a collection of very old and quite new, Irish and Scottish Traditional music, a personal selection of Fintan’s which arose out of his playing in Scotland with singer Tim Lyons in the 1980s. The music looks both backwards and forwards – beginning in the 18th century Scottish composition period which had tunes that we still play as Traditional music today. Included too are items of the more standard twentieth century Irish piping repertoire, some from Co. Clare, branching into 1950s-onward new composition. The old Scottish material comes from the 1765 Neil Stewart Collection of Scottish Music. Fintan had a privileged glimpse of Sutherland fiddler Charlie Menzies’ copy of the manuscript – the only one in existence outside of the George V Library in Edinburgh – while on tour with Daithí Sproule in 1989. These tunes were chosen for their similarity in style and ‘feel’ to Irish music, something which suggests that older Irish and Scottish music were once stylistically closer than they are today.

Purchase Back to the Starry Lane

Fintan Vallely is from Co. Armagh, in Ulster. He brought out the first ever Irish flute tutor in 1986 (new edition 2011), was The Irish Times and Sunday Tribune critic for Irish music in the 1990s, and compiled the A-Z Companion to Irish Traditional Music (1999, 2011, 2021). Other writings are Sing Up! – Irish Comic Songs and Satires, and Tuned Out – Traditional Music and identity in Northern Ireland. His debut LP album Irish Traditional Music was by Shanachie, New Jersey, in 1979 (CD in 2008), and has a CD of satirical song with Tim Lyons – Big Guns & Hairy Drums (2000) [imusic.ie].
Mark Simos began playing rock music in Los Angeles, evolving into Irish Traditional with Knock na Shee, then as a fiddler songwriter and tunesmith played Old-time, New England, Quebecois, Bluegrass and Klezmer. An accompanist on many albums, his four solo CDs feature original song and old-time-style fiddle tunes. Alison Krauss and Union Station, the Del McCoury Band, Kate Brislin and Jody Stecher have recorded his work. He played on Fintan’s 1979 album, but this one arises from a chance encounter in Valpolicella, Italy in 1990 [devachan.com].

Available online from www.whinstone.net
1. ‘The Blackbird’ is a 19th century ‘set dance’; ‘The Doon Reel’ and ‘The cat that Ate the Side-comb’ are from Breathnach’s 1963 Ceol Rince na hÉireann 1.
2. ‘The Shanghai’ and ‘The Ducks of Magheralin’ are Orange marches, the first derived from older Irish music, and found in ‘The Boys of Tandragee’ and ‘The Swallow’s Tail’.
3. ‘The Setting Sun’ is by the Chicago composer Liz Carroll; Lady Emilia Kerr’s is a hornpipe from Neil Stewart.
4. Miss Chalmers’ is a strathspey from Stewart, built up to reel tempo into Fintan’s ‘Rockforest Reel’, named for a man whose Co. Tipperary, big-house, Anglo-Irish father moved to Sutherland in 1921.
5. ‘A Stór Mo Chroí’ is from the singing of Mick Flynn, followed by the single jig ‘Mo Ghrása ar Maidin’, from Breathnach.
6. ‘Lexie McAskill’s’ is a Scottish pipe reel, here with two new parts by John McAskill. ‘Peggy on the Settle’ (known in Scotland as ‘In and Out of the Harbour’) is in O’Neill’s, and ‘The Limestone Rock’ is from Breathnach.
7. ‘The Dear Irish Boy’ is uilleann piper Felix Doran’s version of the song-air.
8. ‘The Junction Pool’ and ‘Cheviot Blast’ are double jigs by the Aberdeen composer Iain Hardie.
9. ‘Gregorium Uproarium’ is a play on the reel ‘The Musical Priest’ and its relative ‘Raithneach a Bhean Bheag’.
10. ‘Louden’s Bonny Woods and Braes’ is an old Scottish strathspey, played here into Iain Hardie’s ‘Auchope Cairn’, and ‘The Cleek’.
11. ‘Poll Ha’penny’, a Scottish hornpipe long in the Irish repertoire, is played in a superb solo by Mark on guitar.
12. ‘The Duke of Atholl’s Rant’ is likely the original of the Irish ‘Humours of Ballyconnell’. ‘Miss Betty Plummer’ is similar, close to a march; both are from Stewart, as is ‘Scanie Neer’s’ (sic.). Cavan/Philadelphia fiddler-composer Ed Reavey’s ‘Starry Lane to Monaghan’ closes, named for the cosmic memory of childhood travel to his mother’s home county.